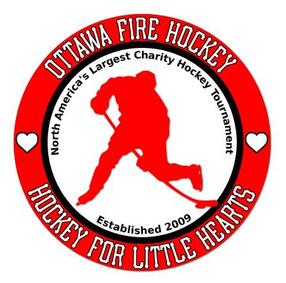 Firefighters across Canada participating in a recreational and competitive sport, all in aid of charity.

Fellow Firefighters, Families and Hockey Fans have grown to know this Canada wide tournament which is now in its 8th year

as the “Firefighters Hockey for little Hearts”. The 24-team tournament has grown since its inaugural event. Bringing

firefighters from as far away as St. John's NFLD in the East and Alberta in the west.

for deserving Charites within the communities they serve and protect in, all the while competing for their home province and

This event and fundraiser Donates the proceeds to two very deserving charities.

The CFFF was created to honor and remember firefighters who have been killed in the line of duty and to support their families. A national ceremony is held every year in our Nation’s capital reading allowed the names of those who have fallen in the line of duty.